BMW’s striking new sports coupé pulls off something quite special. Steve Smith gets behind the wheel of the all-new BMW M850i xDrive Coupé.

It has been a long wait for BMW fans. Three decades ago, the first-generation 8 Series was launched to enthusiastic applause around the world as the striking coupé debuted at the 1989 Frankfurt Motor Show.

It was a classic grand tourer – more of a long-legged, V12-engined cruise missile built to cover vast distances than a lithe and nimble mountain pass conqueror –and a real looker too.

Low and wide, with a pronounced wedge-shaped profile and pop-up headlamps, the first 8 Series was the automotive equivalent of the B-2 stealth bomber that was also making its public debut around this time. All in all a tough act to follow then.

Launched in Europe toward the end of last year, the new 8 Series now makes its debut in the South African market with a hardtop and a convertible version, both powered by a twin-turbocharged V8 model.

And given its predecessor’s success, this new generation certainly has some big shoes to fill.

It has certainly got this box ticked – even BMW opponents will be hard-pressed to find fault with the blend of graceful lines and low-slung aggression that the BMW Group’s design director, Adrian Van Hooydonk, and his team have penned.

The fastback silhouette with its long, heavily raked rear window and cinched waist is not your usual BMW fare – in fact, it is quite Mustang-like – but the mix of flowing lines and convex/concave creases, courtesy of some very complex sheet metal pressing, make it a far more intricate and detailed shape than that Ford.

Inside, it is a classic 2 + 2 GT configuration that allows limited space to two rear passengers.

The interior styling is a somewhat understated mix of high-quality leather, soft-touch leather and alloy trim, but is tastefully executed and of high quality. But it is the new driver interface that really grabs your attention.

Perhaps not everyone’s cup of tea, but I found the info-graphic-style presentation intuitive with the crucial driver information instantly understood. 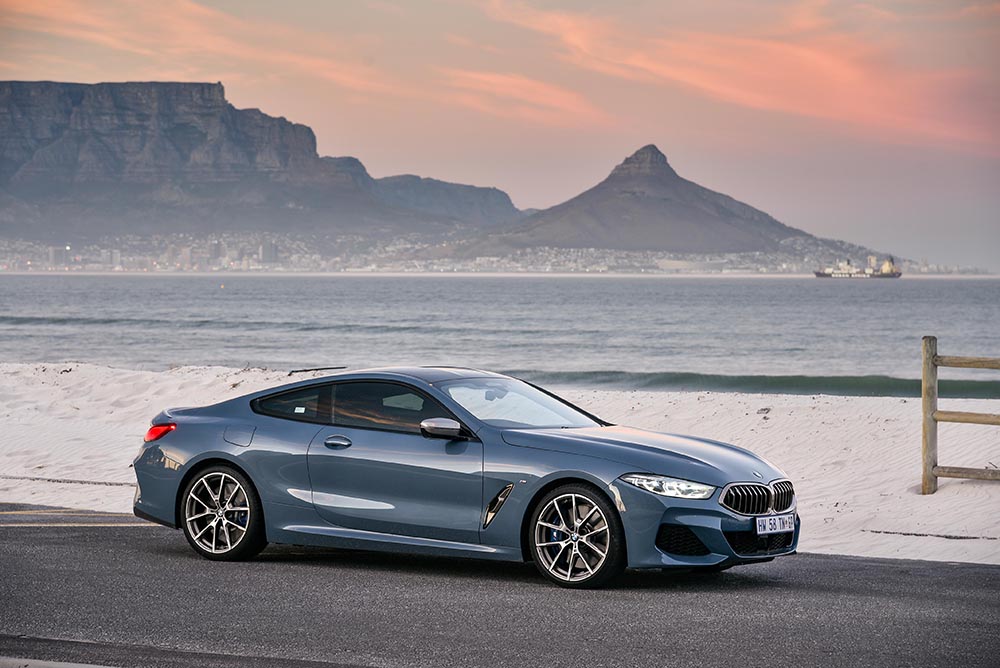 Here, it doesn’t just tick a box, but includes a new addendum… and gives that a bold tick too.

The N63 4.4-litre twin-turbo V8 is a familiar one found in other large BMWs; in the M850i, though, it benefits from a stiffer crankshaft, revised cylinder heads and larger turbos to deliver huge dollops of power.

But this is not that addendum… the way it handles is what will really surprise you.

Some 4.85m long and weighing in at nearly two tonnes, the new 8 Series is a big car, but the agility it displayed through some of the mountain passes I drove it over, belied those stats.

Along with sure-footed grip offered by the large 20-inch rubber and a rear-biased xDrive four-wheel-drive system, this M850i also gets BMW’s Integral Active Steering tech with rear-wheel steering.

Through tighter, slower corners, the rear wheels turn (marginally) in the opposite direction to the front, effectively shortening the car’s wheelbase and disguising its length.

A big GT that also handles like a sports car is a difficult trick to pull off, but the new 8 Series does it with aplomb.

Along with that active-steering set-up, the Driving Experience Control manages the powertrain and suspension systems, allowing you to toggle between Comfort and Eco Pro modes at one end of the spectrum, to Sport and Sport+ at the other.

It makes for a powerful and versatile GT that delivers dynamic performance, as well as long-distance comfort… and that means it does not just fill its predecessor’s illustrious shoes but takes them a step or three further ahead.