Mokhotlong, a sleepy outpost flanked by the uKhahlamba-Drakensberg mountain range, is a good place to start exploring Lesotho.

The journey there is vertiginous and arduous, and we endure almost two hours of bends, turns and twists to travel only 60km from the Sani Pass border gate via Thaba Tseka (one of Lesotho’s 10 districts).

The Sani Pass is a portal that links Lesotho with SA’s KwaZulu-Natal province. The drive up here is taxing, remarks our driver, as he engages an even lower gear to negotiate the road, but the scenery is ample reward. 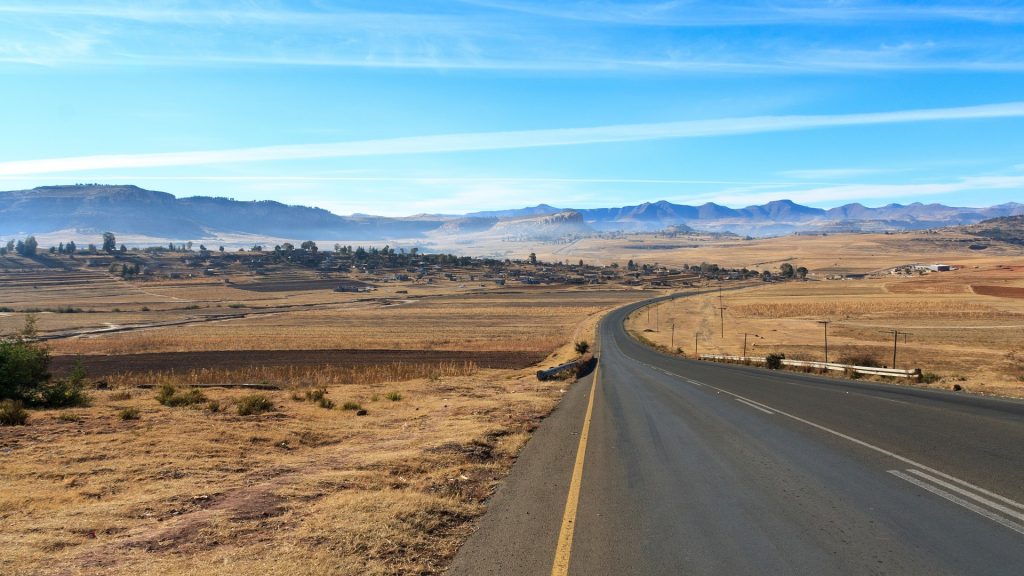 Desolate villages with thatched, stone huts lie ahead. Cattle, sheep and goats graze, oblivious to their place or value on the canvas. I don’t spot a single bald ibis (mokhotlo), after which this sheep-shearing district is named, but do see a variety of other birds whose riotously colourful plumage would make photographers and bird watchers swoon. 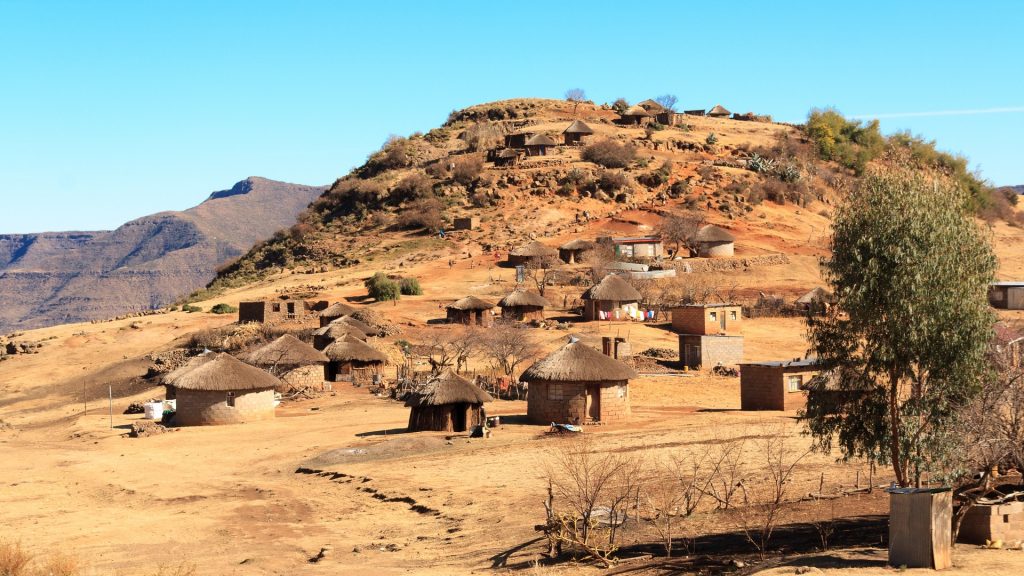 Small stones on the roadside are for herd-control, by shepherds, from a distance. So, fear not, motorists. After all, Lesotho’s a land of peace – khotso – as the ubiquitous, age-old, local greeting goes. In a charming country with grinding poverty, it’s a pity that tourism remains “untapped gold” as boss of marketing company T-Connexion, Thabo Maretlane, observes. 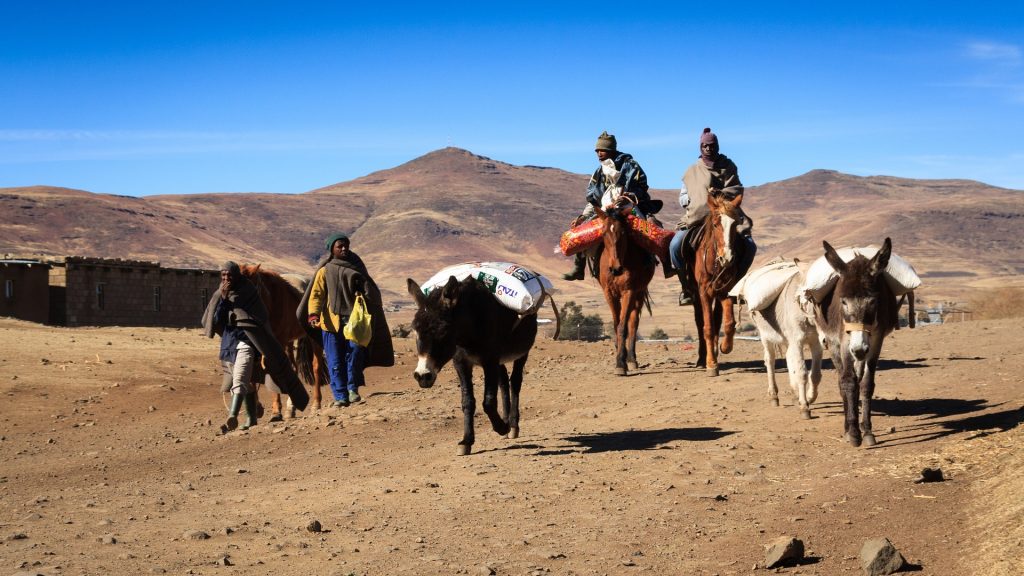 Cars and carts share village roads, as do ox-wagons. The terrain’s rugged and not always welcoming to motor vehicles, which is why landing strips (for postal and medical services) are common. It’s also partly why many villagers rely on mules, donkeys, horses and Basotho ponies to get around. You’d be hard-pressed to find a child over the age of 10 who isn’t old-hand in the saddle. So, it’s unsurprising that some kids find it funny, if not weird, when visitors exhibit their lack of horse-riding skills. Thankfully, patient hosts and guides always lend a hand.

Then there are the cyclists who are routinely punished by the Mountain Kingdom’s landscape and rutted roads. Pain and having to slog doesn’t deter them. It’s the same story for hikers, as well as the participants in the 120km Moshoeshoe Walk. This annual heritage trail re-enacts the hegira (exodus) the Basotho founder king – also known as Thesele – led from Butha-Buthe to Thaba Bosiu in 1824.

As with B&Bs, home-stays are great for getting a taste of the soul of Lesotho. Home-stays have zero five-star trappings – only basic amenities – but that doesn’t matter. The people are warm, accommodation rustic, and prices reasonable. The opportunity to live in a village ­of barely 1 000 souls – like Mapholaneng’s Mofolaneng – is priceless. Catering options include home-cooked meals or a visit to a restaurant. In these climes, the eyes feast on sweeping green expanses of alpine countryside.

Local hotels are rather modest, but can provide a soft landing for hardcore urbanites. Culinary tastes are no different from those of SA or Swaziland, but don’t leave the country without sampling bohobe (bread made the traditional Sesotho way).

To the east (of Mokhotlong or Mofolaneng?) looms Thabana Ntlenyana, Sesotho for “beautiful little mountain”. In reality, it’s anything but little. Soaring almost 3,500m above sea level (to Mt Kilimanjaro’s 5,892m), this beauty occasionally hangs out with clouds. Climbers return home with selfies that tell their tales of joy, pain, bruises, endurance and satisfaction. It’s a heady mix. It takes an hour to summit, but being untrained, and given the exceptional altitude, I give it a miss. Just seeing the tangerine sun rise behind this majestic landmark in the beautiful summers is a memorable experience.

In cold months, however, snow makes snuggles a must. Lesotho winters are so raw that children’s tears freeze on their cheeks. Of course, that’s a legend, but the razor-sharp chill is no myth!

Regardless of the season, many people wear seanamarena blankets, especially in this district and its neighbours on the Highlands. Like stone huts, these blankets – also known as “mountain rugs” – and mokorotlo hats are woven into the kingdom’s fabric. The reason is the weather: snow abounds in winter, while temperatures drop quickly in summer, seemingly on a whim. 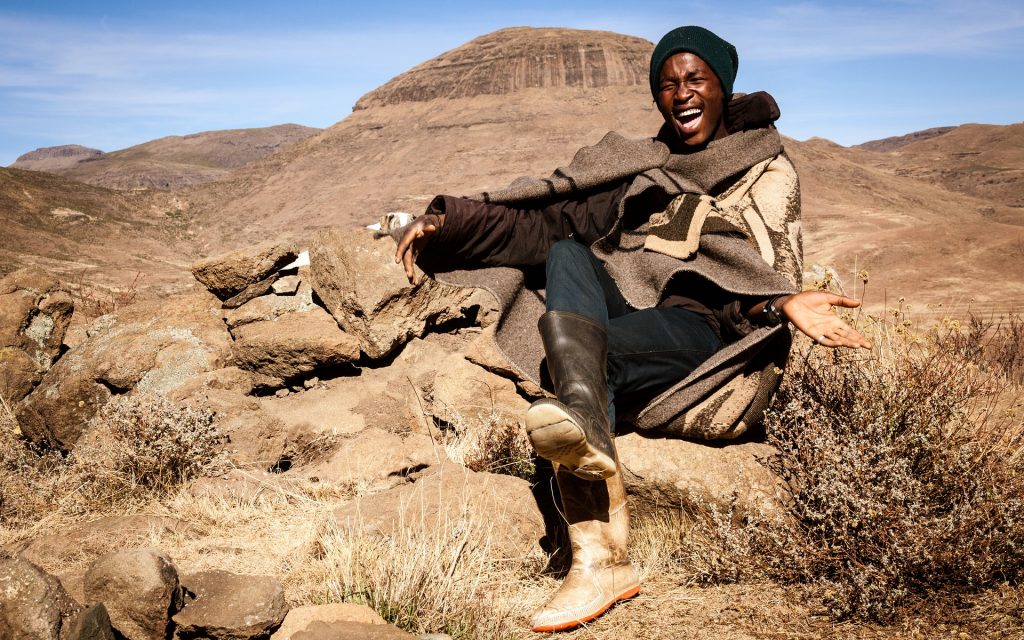 The weather may be changeable, but a constant feature is the serenity. In many ways, no less for sense of remoteness, with Mokhotlong being Lesotho’s answer to the Northern Cape or, further afield, Timbuktu.

Moving northwards, Afriski Mountain Resort seems to pop up in the middle of nowhere along the A1 Road en route to the history-rich Butha-Buthe on the banks of Mohokare River. To the south is the wondrous Maloti mountain range, cloaked in white. Ts’ehlanyane National Park, Lesotho’s largest part and a delight for nature lovers can be found in the same district. With mountains turning from green to white as early as May, Lesotho resembles wintry Swiss landscape by mid year. 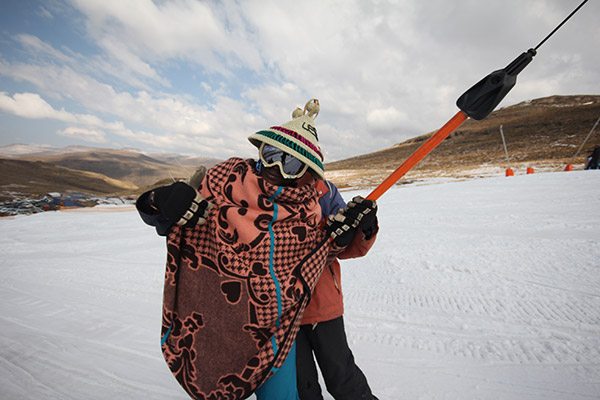 While the resort’s design mimics an Austrian village, the prices are defiantly local (the Lesotho currency, the maloti, is pegged to the rand). Skiing for adults starts at R800, and R350 buys a four-hour private lesson. Activities and the restaurant’s are generally family-friendly but the menu falls short on vegetarian options. The cost of Afriski’s accommodation ranges from R150 for backpackers to R1 100 per night for higher-end, family-type apartments.

When temperatures fall below freezing point, the best way to ward off the cold is with the comfort of a blanket and quarts of icy Maluti beer. I learn this from shepherds doing exactly this over a brazier in Butha-Buthe. It’s a short distance from Caledonspoort border gate and, at last count, has a population of 10 000. 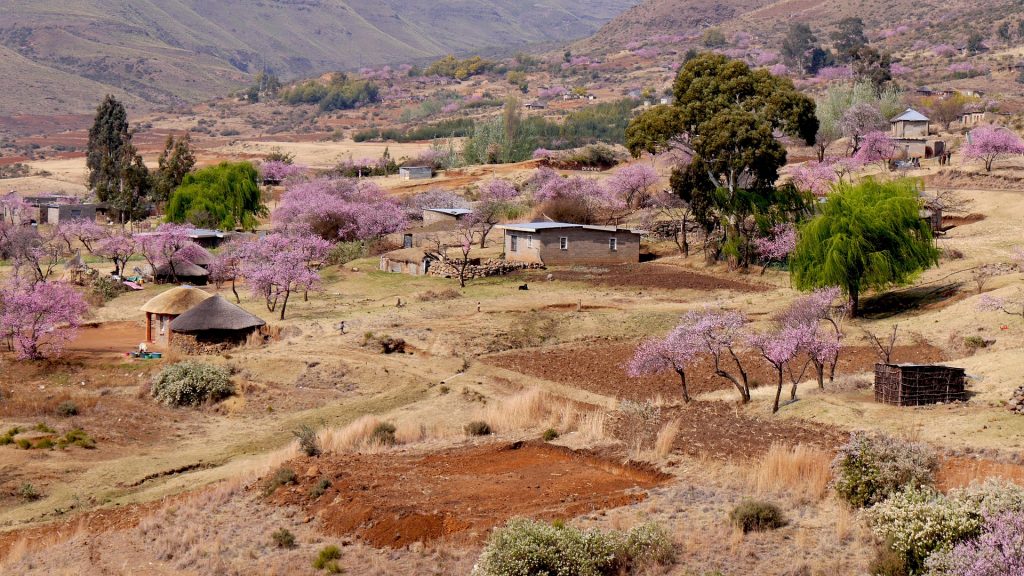 Joburg’s bustle is hardly five hours away. Driving visitors from the Eastern and Western Cape enter via posts like Telle Bridge, which is a stone’s throw away from the mighty Senqu River, while King Moshoeshoe I International Airport in Maseru is where most air-travel visitors fly in and out. Maseru Bridge, the busiest port of entry, is open around the clock.

It was here in Butha-Buthe, two centuries ago, that Thesele’s men were repeatedly humbled by Queen Mother ’MaNthatisi’s army from the highveld. This forced their 1824 exodus to the now-sacred site, a spot that’s a three day hike (from where) for today’s Moshoeshoe Walk and other heritage hikers.

Something about that site stirs emotions. Unbeknownst to many, explains Maretlane, whose company hosts the Moshoeshoe Walk every March, not once did the Basotho monarch and King Shaka ka Senzangakhona cross swords.

Engaging narration by Pheelo Mohloai and Mohalenyana Sekhonyana, guides at the Thaba Bosiu Cultural Village, takes visitors to the Moshoeshoe era. Climbing Thaba Bosiu, near inverse cone-shaped Mt Qiloane, is punitive but the 120m summit and moments spent atop this historic plateau are enriching.

Heading eastwards, Leribe’s undulating hills are welcoming. The district’s key town Hlotse across from the Free State’s picture-perfect Clarens is a trip back in time. A town tour hosted by Bird Haven B&B spans rock painting sites and the field of the Gun War fought in 1880. Stalls groan with great buys and souvenirs such as mokorotlo, a Basotho hat inspired by Mt Qiloane. A man in a black and blue seanamarena blanket glued to his koriana (accordion), passes by but not before adding a determinedly Lesotho soundtrack to the scene. 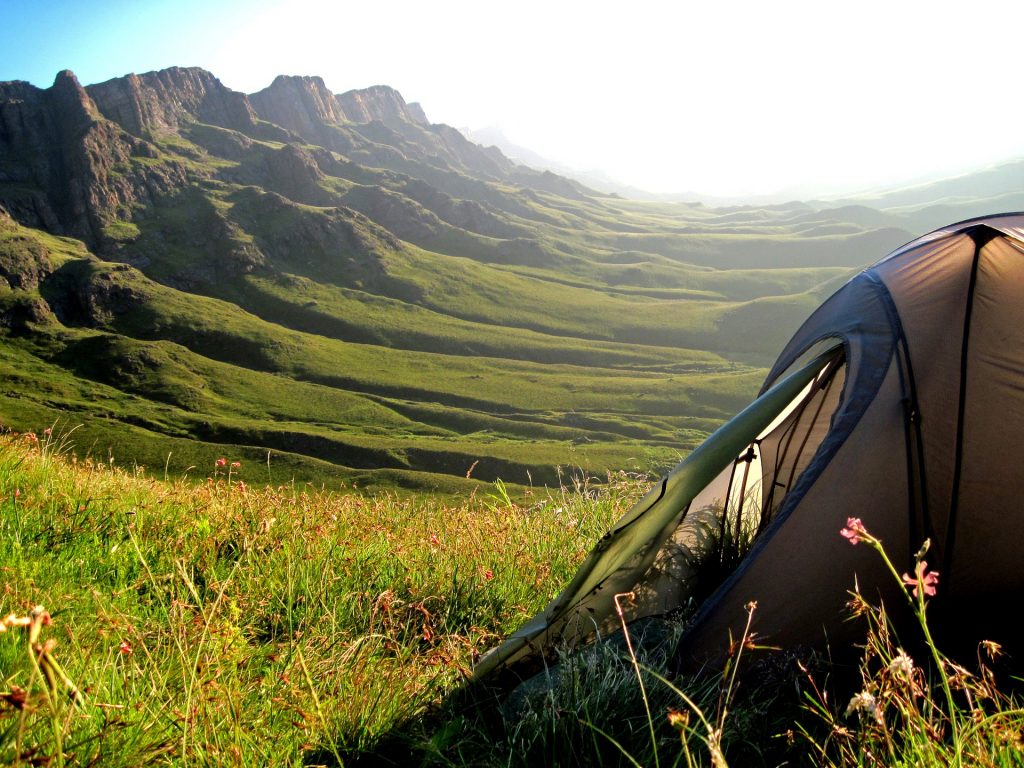 The star of the show – especially for history, geography and palaeontology enthusiasts – is the site of pre-historic dinosaur footprints on the riverbed of Subeng Stream. To fully engage with nature, take a hike or go on horseback, to cover the 10km trip from the town centre. Local B&Bs and hotels can refer you to guides and horse or pony owners.

A visit to Hlotse is incomplete without a stop at Pitseng caves, whose rock paintings date back centuries. To get here, you’d doubtless need a guide as Pitseng, a pristine spot, is stashed in the heart of Leribe. On the other side of Hlotse are the Tsikoane caves, also out-of-the-way and only reached via circuitous rutted routes. The caves’ entrance in the green cliffs are captivating and can be seen from a distance. The highlight is yet another set of dinosaur footprints – ancient history saying khotso to the present.

Palaeontology fans would grin at a mere mention of Lesothosaurus, Massospondylus, Heterodontosaurus and such. Those creatures roamed these lands millennia ago. The kingdom has the largest concentration of dinosaur footprints in the world.

These footprints delight visitors who have one more reason to smile at the simple, yet mythical beauty of Lesotho.

Where to sleep, eat and play in Lesotho

Previous article
Top 10: Most Popular Destinations in the World
Next article
Beauty on Board: Treats for Long-Haul Flights