All Aboard The Ghan – an epic train trip across Australia

The Ghan train journey through central Australia is said to be one of the top 10 railway adventures in the world. And we realise upon arrival at Darwin Railway Station that it’s also one of the most surreal. After all, how often does one get to board a train the length of which is more than twice the height of the Empire State Building?

Standing on the platform, we can see neither the beginning nor the end of what is, at 902m, the longest passenger train in the world. With its 38 silver carriages, top-class service and facilities and powerful, red engines, the Ghan is a veritable five-star resort on rails.

We’re about to embark on the three-night, four-day 2 979km Ghan Expedition from Darwin to Adelaide, with stops at Katherine Gorge, Alice Springs and Coober Pedy.

The Ghan was originally called the Afghan Express, named for the early cameleers who came from Pakistan and Afghanistan more than 150 years ago. This explains the train’s distinctive camel logo.

There are three cabin classes: Gold, Gold Plus and Platinum. Our Gold cabin includes an en-suite bathroom and a picture window offering magnificent views.

Once the initial formalities are completed, we make our way to the Outback Explorer Bar to sample a few some of the available beverages and, in my case, to get the barista to fire up the espresso machine. It’s the perfect space in which to mingle and meet some of the other 300 Australians and overseas guests as the train begins rolling south.

We’re off – on a journey that will showcase the extraordinary colours and vistas of the Australian landscape, from the vast blue skies and fiery red earth of the Northern Territory, to the lushness of the vineyards and rolling valleys in the south.

We’re advised to watch for wildlife early in the morning as this is when they’re most active. During the journey, we spot a variety of birds, wild horses, kangaroos, wallabies and other iconic Australian wildlife.

Lunch on our first day aboard, which is taken in the Queen Adelaide Restaurant, includes buffalo curry and tropical chicken salad, as well as tomato, sweet potato and beetroot tart, all served with a selection of fine wines.

The food is five-star delicious and continues to be so until they roll us off at the last stop in Adelaide.

Not long after lunch, the real Ghan adventure begins with the first of our daily tours, this one to the Nitmiluk National Park Gorge in Katherine. Our boat tour of the gorge takes place in brilliant sunshine and first impressions are mesmerising as we cruise quietly between the towering, ochre sandstone cliffs.

The spiritual tranquility, though, is momentarily cast aside as we catch sight of our first Katherine Gorge freshwater crocodile sunning itself on the sand. He’s not as big as his saltwater cousins but nevertheless, this is as close as I ever want to get to this 3,5m long creature.

Moving on from the crocs, our guide gives us a quick, yet comprehensive talk on the history of the gorge and the indigenous Jawoyn people who are the custodians of the park.

Back on the Ghan the dinner menu includes barramundi and crocodile sausages – so I didn’t get that far from the crocodiles after all!

At the end of each day our attendant magically turns our cabin into snug bunk beds for the night.

We arrive in Alice Springs – or as the locals call it “The Alice” – the next day. Here you can take your pick of four excursions included in the package price, but we decide to take an independent tour – a once-in-a-lifetime flight in an eight-seater plane over Uluru (Ayers Rock) and Kata Tjuta (also known as the Olga’s) via the MacDonnell Ranges and Pine Gap.

Despite being Australian, I’ve never been to Uluru or the Kata Tjuta, so to fly over them and see them close-up like this is an exhilarating experience. Everything we see this day will be etched onto my memory (and memory stick) forever.

A thousand photos later, we land and have lunch with Uluru as the backdrop, before an afternoon walk to the Mutitjula Waterhole. Our guide explains the legend of Minyma Kuniya – the battle between the Dreamtime python woman and the poisonous snake man. Close by we observe some ancient rock art before we continue our walking tour.

Next, we drive part of the 9,4km circumference, astonished at the size of Uluru and learn more about the spiritual and sacred parts of the rock. The people we see climbing it look like tiny ants from our vehicle, highlighting the immense size.

After being flown back to the Ghan and freshening up, we head to the historical Alice Springs Telegraph Station on the Todd River for a spectacular dinner under the stars.

The station played an integral role in connecting Darwin to Adelaide and the entire country to London when transmissions started in 1871. The historical site offers visitors a glimpse into what life was like in “The Alice” over 150 years ago.

But back in the present, the setting for dinner is like an outdoor ballroom, with numerous tables set up for the silver service. The meal includes delicious barbequed tenderloin steaks cooked to perfection with sides of salads and roasted vegetables.

We finish off with pavlova, one of Australia’s favourite desserts, before an astronomy expert gives us a talk about the stars, which can be seen perfectly in a remarkably clear sky. Later we dance the night away in the aisles of red earth.

The next day’s tour takes us to one of the world’s top opal producers – Coober Pedy. This mining town is situated in the outback of South Australia, 680km south of Alice Springs and 850km north of Adelaide – or as they say Down Under – “in the middle of nowhere”.

Our first stop is the underground Saint Elijah Serbian Orthodox Church which is carved into the sandstone. Later we discover how many of the locals have created underground dwellings to keep them cool in summer temperatures that can soar up to 50 degrees Celsius.

Another astonishing Coober Pedy institution is the golf course which, despite not having a single blade of grass has been voted amongst the top ten unique golf courses in the world.

Our bus driver observes wryly that Coober Pedy looks like “the aftermath of a plane crash” as it’s littered with wrecked cars and mining equipment, but I feel it adds to the charm.

On the outskirts of town there are countless mounds of soil from open-cut mines. The countryside around Coober Pedy has been used in many a movie that required an alien or Armageddon-like landscape, including the latest in the Mad Max franchise.

Later we have lunch in an unused underground mine and visit an opal museum where we’re shown how these incredibly rare and exquisite gems are mined.

About 15km outside Coober Pedy, we see part of the famous 5 300km dog fence that was built to keep the dingoes out and the sheep in and safe.  To top off an extraordinary day, our next stop is the Breakaways Conservations Park.

The Breakaways are a series of flat-topped mesas with many layers that change colour spectacularly at different times of the day, and are particularly striking in the early morning and late afternoon. Their name comes from the fact that they look as if they have “broken away” from the main Stuart Ranges.

At the lookout point, the Ghan staff welcome us to the al fresco bar they’ve set up overlooking some of the most striking landscape of the Outback.

Our trip has exceeded all my expectations and when we leave the Breakers, we’re greeted my more drinks and hors d’oeuvres waiting outside the train. It’s the perfect opportunity to chat to the new friends we’ve made and reminisce about our experiences on one of the world’s greatest train adventures. 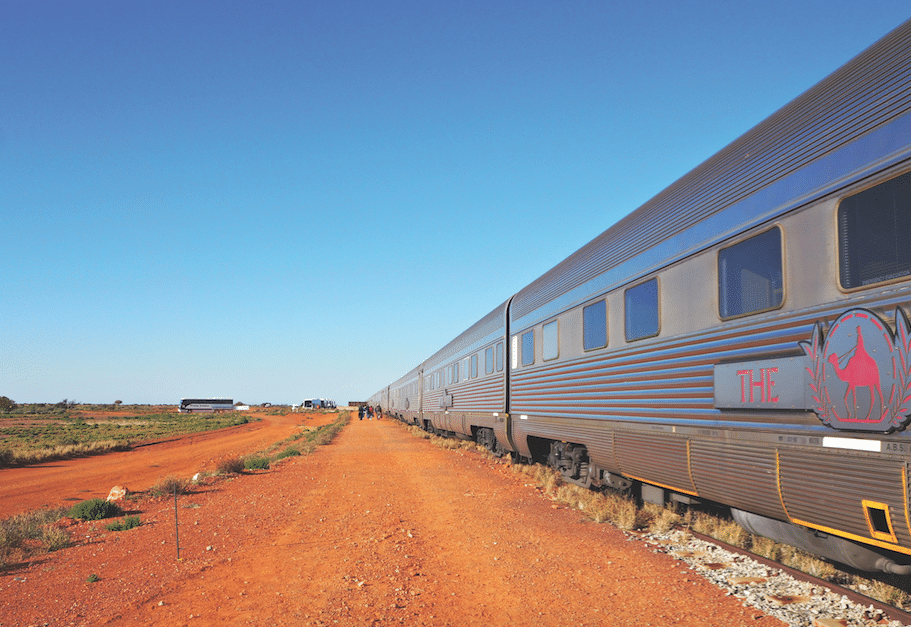 The Ghan Expedition from Darwin to Adelaide operates from April to October. Book your adventure with Great Southern Rail at: greatsouthernrail.com.au

Located in the heart of the city and overlooking Darwin Harbour, the Hilton Darwin offers sensational views. Visit: darwin.hilton.com

Overlooking Victoria Square, the Hilton Adelaide is set in the heart of the city’s entertainment, shopping and dining precincts. Visit: adelaide.hilton.com

Text and Photos by Daniel Resnik

Surfing In The Heart Of The Winelands