Despite the city’s sad history, it isn’t a sad place to visit. Instead you get the sense that the city is looking to the future with dignity

It was while reading Dan Carter’s “Fools Rush In” that Sarajevo first called my name. Offering a startling portrayal of the capital under siege and the tragedy of war, it was the city’s resilient people with their dark sense of humour and determination to embrace normal that touched me. Tales of barbers cutting hair on the streets, sheltered courtyards turned into food gardens, the local brewery supplying residents with water – and the Sarajevan women maintaining their style and fashion in proud defiance. The underlying spirit of the city could not be broken, despite the devastating attack it was under during the 1425 day siege that lasted from April 1992 to February 1996, leaving almost 14 000 dead. The longest in modern history, the city was cut off from food, medicine, water and electricity, under attack by snipers and shelled at least 300 times a day, leaving thousands of civilians dead and wounded.

As much as 60% of the city was destroyed at the time with the process of recovery slow with many buildings still wear the marks of war. Yet I am soon to learn that this incredibly scenic city is much more than its sad history.Joining Sarajevo Walking Tours for their East Meet West, as well as War Scars and New Times tours, I’m injected with hope by the young guides who speak of the rebirth of the city through education, the arts and emerging food scene.

As the capital of Bosnia and Herzegovina, Sarajevo has a compact centre with museums commemorating local history, including Sarajevo 1878–1918, which covers the 1914 assassination of Archduke Franz Ferdinand, an event that sparked World War I.On either side of Sarajevo’s Miljacka River, grand Austro-Hungarian influenced buildings stand proud; while just beyond are the charming narrow passageways of the old city, or Baščaršija, with its market traders, clay tile roofs, tall domes and minarets reminding of an extended Ottoman era that was to shape the city’s future.

Adding a touch of modern are the inviting high-end stores and restaurants serving delicious cuisine and traditional dishes. Lovingly tended flowers on the sidewalks bring colour to grey buildings and there’s a familiar air of European living, with the Turkish influence is strongly felt. A visit to the Museum of Crimes Against Humanity and Genocide centre, as well asGallery 11/07/95 that documents the Srebrenica massacre, offer an essential background to the Balkan War. 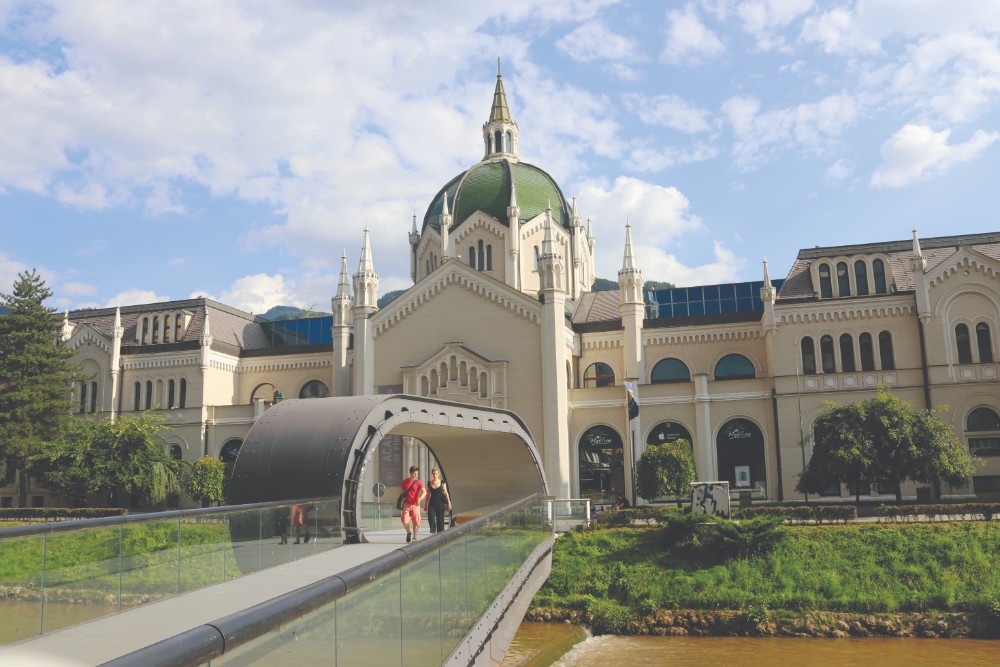 Sarajevan days are best spent walking the riverside, becoming familiar with the layout of the Baščaršija and adopting a “local” for evening drinks. I recommend a visit to the Historical Museum of Bosnia and Herzegovina and time in the Ars Aevi Contemporary Art Museum next to the stadium – it was founded during the siege. Look out for the Sarajevo Roses that mark the spots where people were killed, painted red they symbolise the bloodshed.

A tour of the rebuilt City Hall is a must, with the museum offering an intimate look at pre-war life in Sarajevo. Climb to the top of the Yellow Bastion ruins to take in a fiery sunset and turn the assassination place of Franz Ferdinand at the Latin Bridge into a convenient meeting point. You can’t escape the war. Huge graveyards dot the hillsides and you would do well to visit a few to pay your respect. 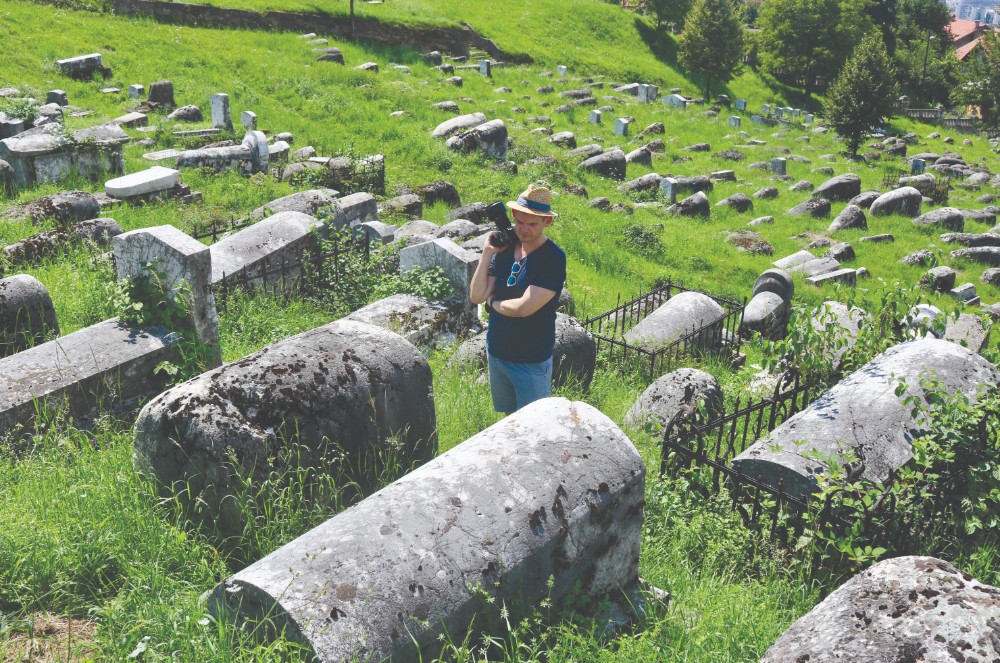 Certainly, one of the most popular attractions since it’s reopening this year, the Trebević Cable Car offers wonderful views towards the city from the 32 gondolas on the scenic nine-minute stretch from the heart of Sarajevo to the top of the Trebević mountain. This is best enjoyed in the late afternoon to capture the evening sun. 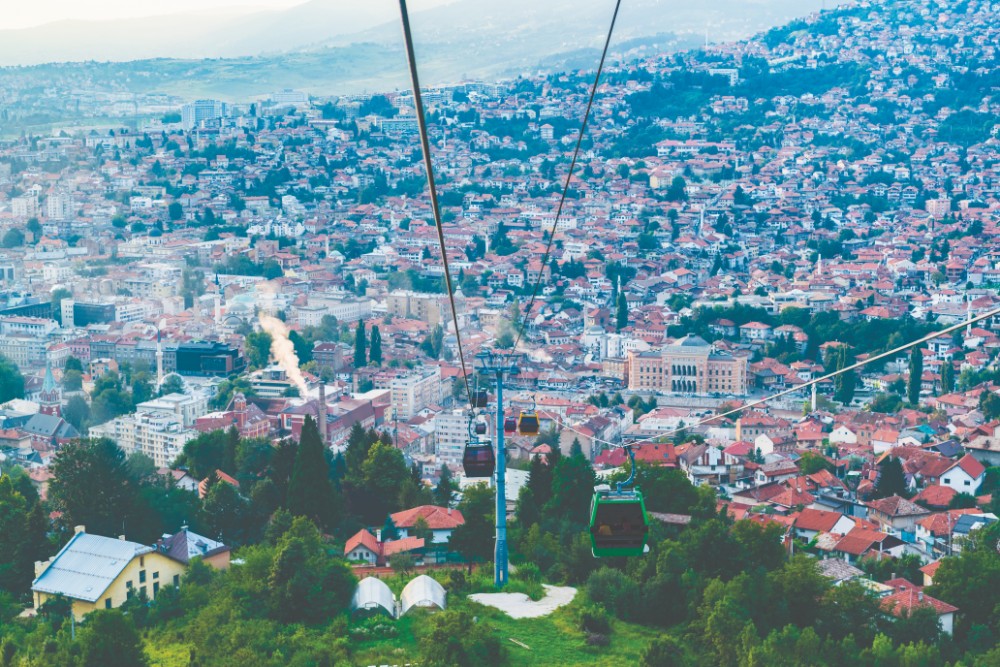 We opt to walk the abandoned bobsled track down and it felt a little like stepping into a scary movie. Constructed for the 1984 Winter Olympics, when the country opened its doors to the international community for a successfully hosted Olympic games, it was later used by the Serbs as a base for artillery, as it offered a deadly sniper position above the city. Today the only attack it’s under is from the graffiti artists expressing their political voices, and nature who seems to be claiming back the land. 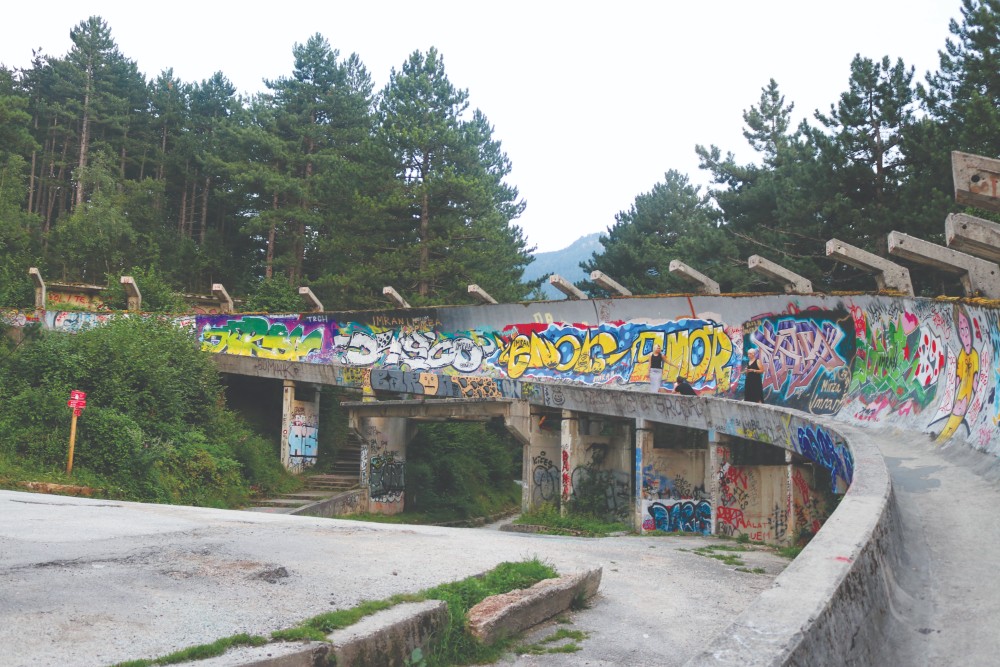 Outside the city centre is the Tunnel Museum that was constructed during the Siege of Sarajevo and used to carry supplies into the city for civilians. Though the actual tunnel ran underground for about 960m, visitors can experience a small section of it today, while learning about the events that surrounded this historic site.

Lucky finds include the Ministry of Ćejf and Teahouse DžirloinKovač, just beyond the Baščaršija. If you’re shopping there are beautiful coffee sets, fabrics and jewellery, all reasonably priced. Have a meal in the Morića Han and at Miris Dunja, a tiny, two-storey place in heart of old town. Egipat holds the reputation for best gelato in town.

Despite the city’s sad history, it isn’t a sad place to visit. Instead you get the sense that the city is looking to the future with dignity, resilience and spirited hope. If you want to discover somewhere remarkable, then I’d say make your way to Sarajevo.

On my last morning I walk to the Baščaršija on two important missions. The first, to stock up on all the baklava I can reasonably carry home. The second, to drink in a cool long sip of water from the old Sebilj fountain, which is said to guarantee your return. 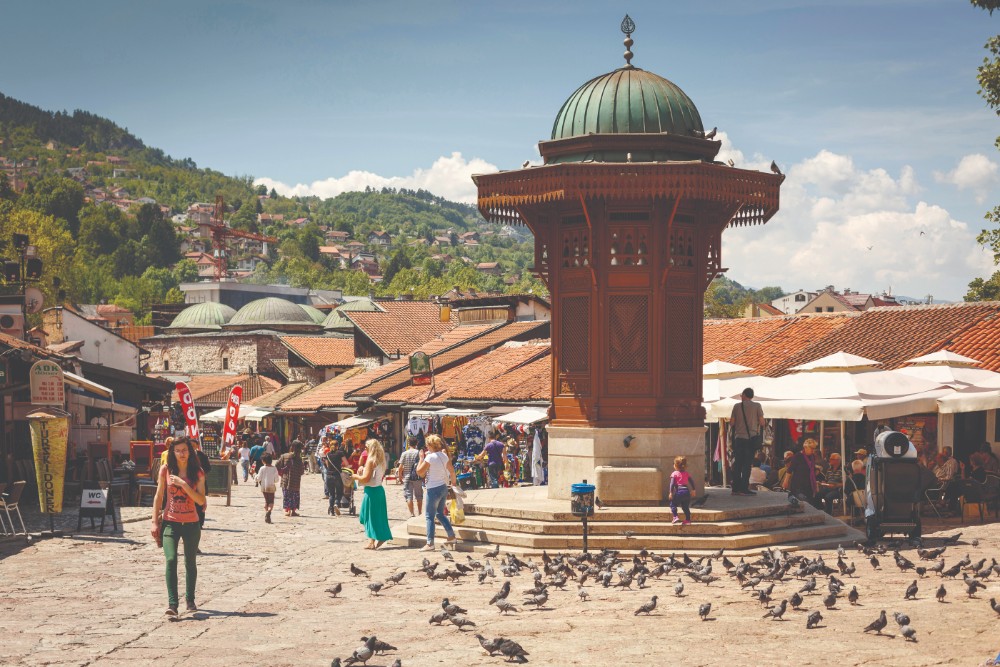 Fly SAA to Germany (SAA flys to both Munich and Frankfurt) then catch a flight with Code Share partner and Star Alliance member, Lufthansa, to Sarajevo.

May to mid-September is best, but beware the dramatic thunderstorms. In December and January there’s a strong likelihood of snow.

The official languages in Bosnia and Herzegovina are Bosnian, Serbian and Croatian, all three known as Serbo-Croatian as they are practically the same language. Many Bosnians speak English, as well as German owing to family connections as well tourism in former Yugoslavia before the war.

This is a very affordable destination for South Africans. A centrally located well-equipped 2-bedroom Airbnb apartment was under R800 per night. Dinner for two with local wine and dessert around R400. A Bosnian burek and traditional coffee, about R30. The currency is the Bosnian Mark and there are ATM’s everywhere.

Contrary to its 1990s war-torn image, Sarajevo is a safe city and ideal for solo travellers. Crime and violence are low, although there’s a chance of pickpockets in crowded areas.

Sarajevo is eminently walkable, with trams and buses for getting around. The city claims the cheapest taxi fares in Europe. Trains easily connect you to other Bosnian cities.

Internet cafes are relatively rare but almost all hotels and most cafes offer free wi-fi, which is generally a decent speed.

One of the most informative sites for tourists is Destination Sarajevo. The site’s App links all main attractions, opening times, contact details; making it easy to get around. https://sarajevo.travel/ 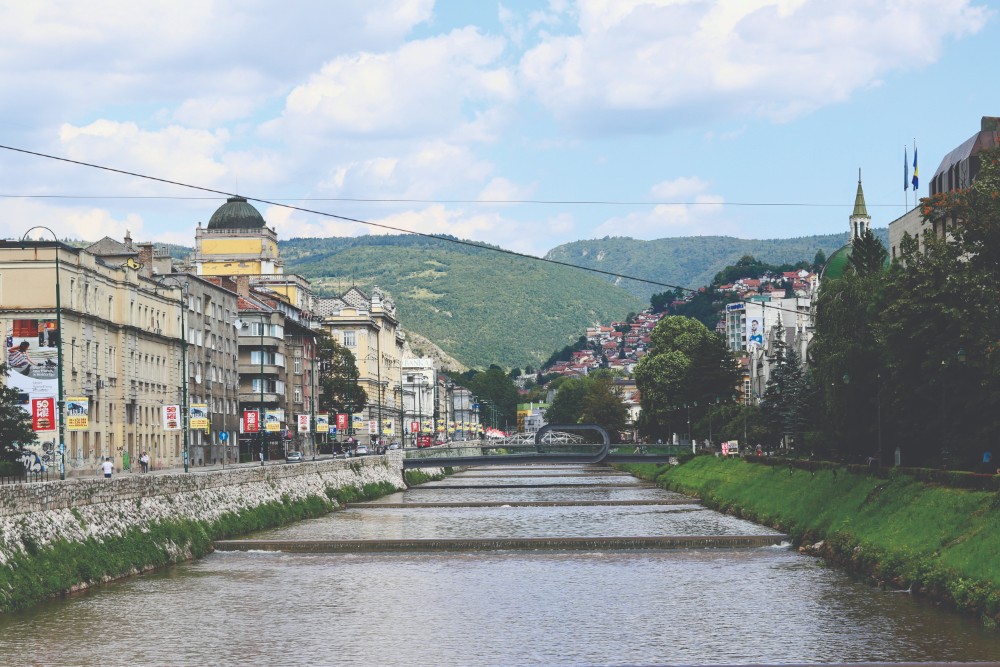 Previous article
Celebrate the Grape Harvest in Paarl
Next article
3 Days in… The Lowveld, South Africa