Founded in 1791 by first American President George Washington, the city exists under the federal rule of the District of Columbia, yet doesn’t form part of any state in the country. This offbeat jurisdiction could be one of the reasons it attracts creatives and intellectuals like New York Times Chief National Correspondent Mark Leibovich and Alan Davidson, former Director of Public Policy at Google.

The White House and the Capitol, with their gracious architecture, are entrenched as the nation’s most cherished symbols of freedom and patriotism. And for a sombre, but stirring perspective of the country’s heritage, Arlington Cemetery contains the graves of the USA’s most illustrious soldiers, jurists and statesmen, including John, Robert and Edward Kennedy.

Knowing how to find more than the guidebooks offer is best left to the natives. Accordingly, Creative Director Pum Lefebure and CEO Jake Lefebure, both of Design Army, share their Best of Washington, DC directory. This husband-and-wife team have worked with brands like the Washington Ballet, Adobe and Disney.

14th Street (NW) – Hosting one of the main bridges crossing the Potomac River into Virginia, this transportation hub offers activities that include shopping, eating and fun.

Washington, D.C., experiences four seasons. It snows in the winter but is hot, humid and very muggy in the summer. Bring lots of water and sunscreen in summer, dress warmly in the winter and wear snow-appropriate boots as ice can make it difficult to get around.

Summer is a very popular time of year. If you want to do things like tour the White House, you may need to ask for tickets at least a month in advance. Many people consider spring the ideal time to see this city: in April the cherry blossoms are in bloom and the climate is usually very mild.

The currency is the US Dollar.

ATMs are widely available at banks, airports and convenience stores. Most ATMs link into worldwide networks (Plus, Cirrus, Exchange etc). ATMs typically charge a service fee of $3 or more per transaction, and your home bank may impose additional charges.

Credit cards accepted at most hotels, restaurants and shops. It is next to impossible to rent a car or make hotel or ticket reservations without one. Visa and MasterCard are the most widely accepted.

Although the airports have exchange bureaus, better rates can usually be obtained at banks in the city. Travelex is another option.

Tipping is not optional. Only withhold tips in cases of outrageously bad service.

Be alert and aware of your surroundings.

Do not accept packages from strangers.

Do not leave luggage unattended.

Plan evacuation routes in case of an emergency.

The public-transportation system is a mix of Metro trains and buses. Visitors will find the Metro the most useful option.

The District Department of Transportation’s goDCgo (www.godcgo.com) is a useful resource for biking, bus, Metro and parking information and route planning. It even has a carbon calculator that compares different modes of local travel.

DC’s modern subway network is the Metrorail (www.wmata.com), commonly called Metro. It will get you to most sights, hotels and business districts, and to the Maryland and Virginia suburbs.

Taxis queue at Union Station, the main hotels and sports venues, but it’s not always easy to hail one on the street.

Fares are meter-based. The meter starts at $3.50, then it’s $2.16 per mile thereafter. There’s a $2 surcharge for telephone dispatches.

Ride-hailing companies Uber (www.uber.com), Lyft (www.lyft.com) and Via (www.ridewithvia.com) are popular in the District. Locals say they save time and money compared to taxis.

Grab fresh sandwiches, gourmet pizza and salads at Pavilion Café in the National Gallery of Art Sculpture Garden (4th and Constitution Aves, NW). The outdoor seating enables you to view the spectacular fountain in the centre of the garden.

Go through the roll-up aluminum garage door to Taylor Gourmet (1116 H St) to discover a delicatessen and Italian market with Philadelphia-style sandwiches built in this former barbershop.

Grab a drink at the H Street Country Club (1335 H St). It’s DC’s only indoor mini golf course and bar, and comes with shuffleboard, skeeball and board games.

Reserve a table at Smith Commons (1245 H St). This three-storey bistro and bar’s menu extends from lobster to lasagne.
Biergarten Haus (1355 H St) is a great German tavern with live music, a large outdoor seating area and many authentic beers on tap.

Enjoy wine by the glass at Cork Wine Bar (1720 14th St) after a long day of sightseeing.

What appears to be the Addams family’s lounge is actually the 18th  Street Lounge (1212 18th St, NW), where vibrant culture and conversation commingle. With live music and special jazz nights, it’s a great place to enjoy DC’s nightlife.

A stroll down M Street, located in the historic, multi-cultural district of Georgetown, yields everything a retail junkie desires.

Across the way is Relish (3312 Cady’s Alley), offering hip women’s fashion and accessories, including brands such as Jil Sander and Balenciaga.

Stop by Showroom 1412 (1412  14th St), where you’ll unearth custom furniture from around the USA, as well as superb vintage finds. 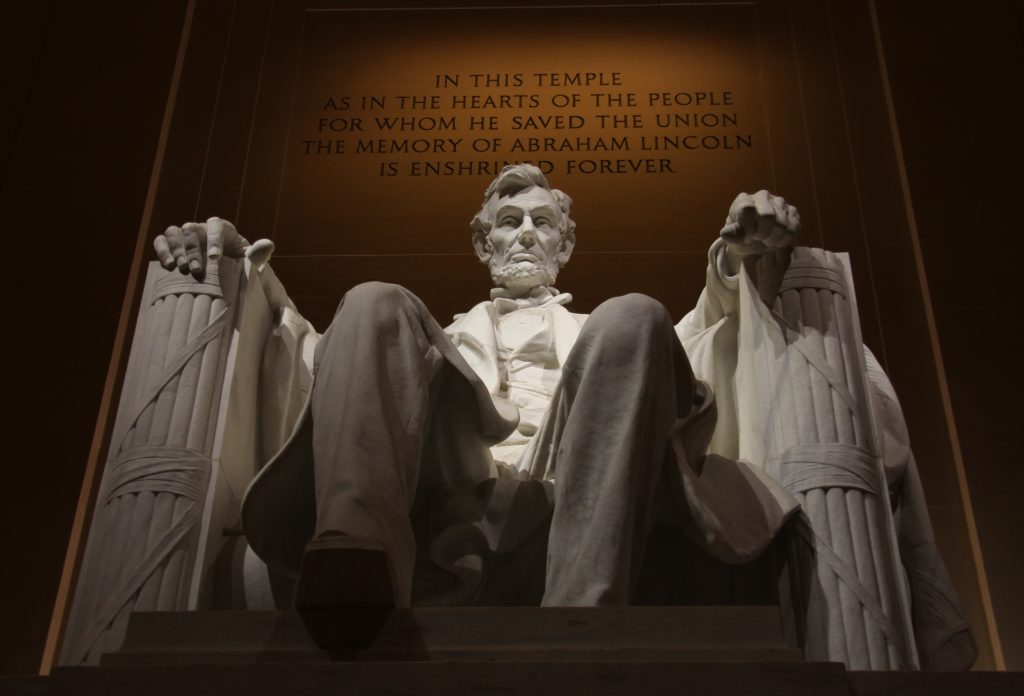 Lincoln Memorial Abe Lincoln gazes peacefully across the Mall from his Doric-columned temple.

Vietnam Veterans Memorial The black wall reflects the names of the Vietnam War’s 58,000-plus American casualties.

Tomb of the Unknown Soldier Military guards maintain a round-the-clock vigil at this crypt in Arlington National Cemetery.

If you’re in DC during the Annual Cherry Blossom Festival (20 March-14 April), go to the US Botanic Garden (100 Maryland Ave, SW), where you can marvel at 26 000 plant and flower species from around the world.

For the kids, the Smithsonian Castle and Carousel (1000 Jefferson Drive, SW) offers fun activities and ice-cream stands nearby.What to do – 1 unique experience

Explore Roosevelt Island. To reach it, walk across Key Bridge from Georgetown to Arlington, Virginia. It’s a great site for hiking and offers a view of Virginia on one side and the Georgetown waterfront on the other. There’s also a large statue of Teddy Roosevelt in the centre of the island.

For the past eight years, Busboys and Poets (2021 14th St, NW) – which describes itself as “a community where racial and cultural connections are consciously uplifted” – has attracted  an eclectic stream of writers, activists, thinkers and dreamers. The perfect spot to sample the subculture of the city.

Just across the street from the Presidential residence, this stately establishment charms with its rich history and unofficial slogan that “nothing is overlooked, but the White House”. It’s named for former Secretary of State John Hay and historian Henry Adams, who lived with their wives in Romanesque homes on the same site in 1884. These two families and their architect, Henry Hobson Richardson, became close friends and called themselves “Five of Hearts”. Their homes attracted writers and intellectuals such as Mark Twain and Theodore Roosevelt. And this ethos continues today.

Previously the Hotel Monticello, the Graham Georgetown was re-opened after a major face-lift. With a nod to previous Georgetown resident and telephone inventor Alexander Graham Bell, it will retain its historical ethos, but include modern luxuries such as a rooftop bar, a sleek cocktail lounge, fine dining options and a state-of-the-art fitness area.

Georgetown’s luxury Capella Washington DC is the result of a $45-million renovation of the former American Trial Lawyers’ Association building. The hotel has a guests-only rooftop pool and bar, and a 70-seater Grill Room, which features artisanal meats and seafood under the eye of Swedish chef Jakob Esko. If you’re a whisky connoisseur, pop into The Rye Bar for rare brands.