Celebrating his fifth visit to Germany’s capital, NIQ MHLONGO walks its streets and finds a cure

The morning of 15 November 2018 is cold. Outside the Alexanderplatz train station, the streets are buzzing; glowing with Christmas decorations. I have five hours to cover about eight of the important landmarks of Berlin by foot, all in an eight-kilometre radius along or near Unter den Linden Boulevard, Friedrichstrasse and Wilhelmstrasse.

The Fernsehturm TV tower is first. It is the tallest building in Berlin, boasting a revolving restaurant at the top with a panoramic view of the city. In what used to be East Berlin, this was a symbol of communist power. In front of it is a big Christmas market, with hundreds of people browsing the stalls packed with food and craft items. Some take pictures with the Ferris wheel in the background, some are ice-skating, some are drinking or eating. I stop at one of the stalls to buy a cup of hot glühwein before joining Karl-Liebknecht-Strasse, heading southwest.

Crossing Spandauer Street, I stop at the Marx-Engels-Forum before the Spree River channel and join the few people taking pictures of Karl Marx and Friedrich Engels statues. Across the street is the DDR Museum, which I’ve been to on previous visits. Berlin’s museums are highly recommended, providing an insight into the history of East Berlin and the daily life of its citizens during the Cold War era.

Following Karl-Liebknecht-Strasse across the Spree River brings me to the neoclassical magnificence that is the Altes Museum. The oldest of Berlin’s museums, it hosts a wonderful collection of Greek and Roman artefacts and has been declared a UNESCO World Heritage Site. The German Historical Museum next to the Altes follows with its logical sequence of exhibits from the 1500s to present day. Highlights include Napoleon’s hat and sword, which he left behind at the Battle of Waterloo along with his pride.

There is construction on both sides of the road, which has now turned into Unter den Linden Boulevard next to Humboldt University. It feels like a knot of time in the history of Berlin is located along this street – it’s a place where the past, present and future of the German population is bonded together. Humboldt University has produced some of the world’s most influential people – Karl Marx, Friedrich Engels, and the philosopher Hegel – and opposite is Bebelplatz, the spot where, on 10 May 1933, the Nazi regime burnt 20 000 books, including the works of Karl Marx

Approaching Friedrichstrasse and the Opera House, the Brandenburg Gate appears 150m ahead. I could turn left towards Checkpoint Charlie – the old iconic border post between East and West – but decide to continue towards the gate and the Reichstag to admire the Prussian architecture.

It is now 3:30pm and getting dark. I walk back past the Holocaust memorial to join Wilhelmstrasse, and the big, modern and rather pretty Mall of Berlin looms ahead. It has just about everything you could want, from food to clothing and homeware – and it’s the former I’m interested in. The big upper court is lined with restaurants peddling different cuisines; I settle for Indian. My waiter suggests the rogan josh (braised lamb chunks with gravy and basmati rice), which I eat while sipping on a Berliner Pilsner.

I have ideas for a return visit. The Potsdamer Platz and the Topography of Terror centre are very close by – but I feel I’ve discovered enough of the broadminded and inclusive spirit of Berlin today. This spirit embodies hope and knows the dangers of divisions. Sometimes I think Berlin is the only city in the world that has completed the full circle of metamorphosis, symbolising the continuity of time and the immortality of the soul. It has fought against and adapted to hostile and evil conditions. From those ashes, it has learnt to find love, humanity, openness, freedom, unity and happiness.

Walking through Berlin cures what no medicine can cure: the ills of the mind caused by constant worry. It heals the soul. The city is no longer the symbol of all the wrongs in the world – those are locked away, deep in the vaults of the past. 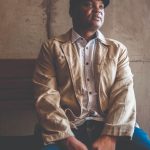 Niq Mhlongo is a journalist and traveller, and the author of the novels and <Soweto, Under The Apricot Tree>.