With Portugal on everyone’s radar as an affordable and enjoyable European country, Lisbon is getting most of the attention. You should be looking further north, though…

The Portuguese do love building a city on a hill. The nation’s capital is famous for its cobbled inclines, and Porto, the smaller counterpart to the north, offers its visitors an equally aerobic experience. Like its capital cousin (and as its name would suggest), Porto is also a coastal city – and, like Lisbon, it’s a relatively cheap vacation by European standards. There are, however, a few differences.

The City of Stone

For one thing, Porto is even cheaper, certainly prettier and, as the concierge at Le Monumental Palace – the beautiful Art Deco hotel that is my lodging – points out, its inhabitants are a lot friendlier.

But apparently that was not always the case. Porto was once known among the Portuguese as “the city of stone”, both because of the large carved blocks of rock that make up many of its buildings and as a sideways-smile-dig at the demeanour of its inhabitants.

“That’s not true any more, though,” says concierge Sofia. “Before we became part of the European Union in the mid-1980s, Portugal (especially Porto) was very poor. Our people were not so much unfriendly, as resolute. That’s all changed now. Tourism is our big industry, and Porto is very welcoming.”

True enough, the people of Porto are an engaging lot. From those manning the cafés and restaurants to the folk on the street, its inhabitants confirmed this friendly city’s growing reputation as one of Europe’s hidden cosmopolitan gems. Nourished by the Douro River that empties into the Atlantic, Porto’s old city rises up from the quayside to the downtown Baixa area.

Spanning it and the Vila Nova de Gaia district on the opposite bank is the mighty Dom Luís I Bridge – a masterpiece of Victorian engineering that serves as a motor vehicle, tram and pedestrian link.

For an early-morning view of this beautiful city, this bridge should be the first stop on your itinerary. Grab a cup of coffee from one of the many small cafés on route – and of course a pastéis de nata. You may have sampled one of these famous custard tarts back home, but trust me: you’ve not tasted one until you’ve tried a freshly baked, warm pastéis in Porto or Lisbon.

At about 90m high, the bridge’s top deck is going to leave the acrophobic a little dizzy, but the reward for a slightly sweaty-palmed amble across its 170m span is worth it. The bridge will take you across to Jardim do Morro park; from there you’ll have the perfect high vantage point back across the Douro to the old city – and an idea of exactly where the next stop on your tour should be.

Make your way down the hill back to the base of the bridge and take the lower deck back across to the old city. From there you can either walk up the steep slope or take the little Funicular dos Guindais that, for €5, will take you up to the old city’s plateau. Once there – and depending on the time of day – have more coffee or a glass of wine at the delightful Cal café before a walk up to the Torre dos Clérigos. It’s Portugal’s highest campanile (free-standing bell tower) and the city’s landmark. Between 9am and 7pm, you can climb its 200 steps – but be prepared to queue. (There was a 45-minute wait on the Saturday I was there.) 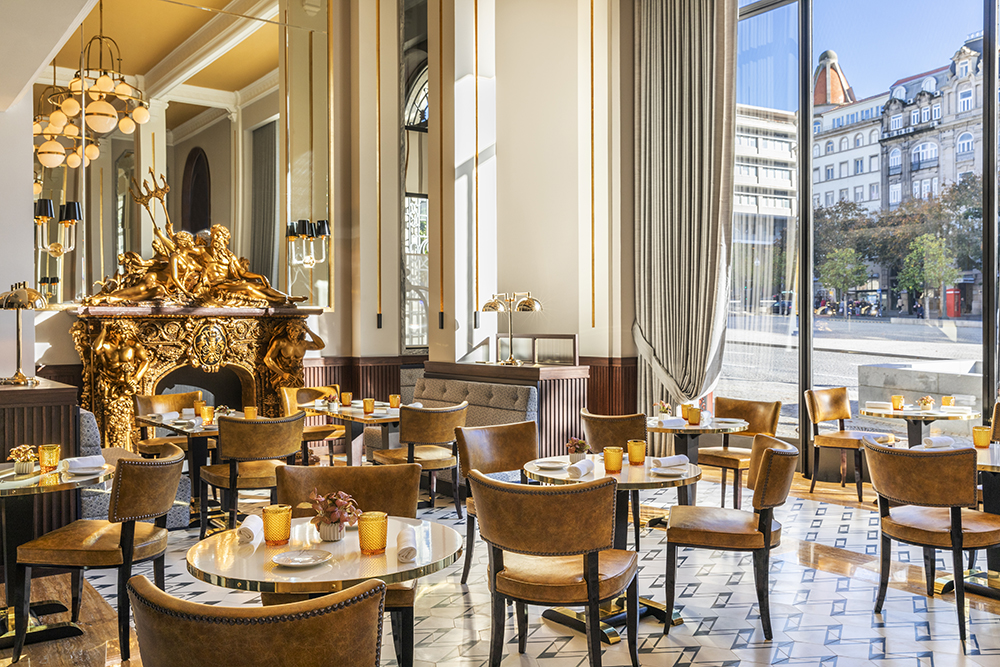 It is close to Clérigos that you’ll also discover the little-known connection this city has to the <Harry Potter> series. Turns out, JK Rowling wrote much of the first book here while teaching English.

Not only are the Centro Histórico’s narrow alleyways very Diagon Alley-esque, but the Livraria Lello – a neo-gothic bookshop built in 1906, with beautiful stairs and walkaways – inspired her descriptions of Hogwarts. It’s still very much a functioning bookshop but its literary fame connection now means you have to pay a €5 entry fee … and still queue to get in.

The bookshop is also right next to the Universidade do Porto, where first-year students walk around in black jackets, pants, skirts and, most noticeably, a black cape or <capa e batina> (literally, a bat cape). It’s part of <praxe> – an initiation rite – and was another Portuense institution the clever Ms Rowling incorporated into her book as the aspirant wizards’ school uniform.

By now, with all that walking and Pottering about– and especially if you ascended the Clérigos tower – you’re probably ready for lunch. Well, you’d better be hungry because Porto has something special in store: the Francesinha, a dish with a personality so strong it’ll probably shake your hand.

One could describe it as a baked meat sandwich, but that would be selling this epic meal spectacularly short. It does involve two slices of thick bread, but that’s where the sarmie reference ends.

Between them are layers of steak, Iberian ham and cheese; the whole thing is covered in more cheese and baked … and topped with hearty, spicy tomato-based sauce. The place to try this – and I hesitate to use the phrase “local delicacy” – is Brasão Aliados. You will need to book though: this dark-timbered establishment is very popular with both local and visiting culinary bravehearts.

As much as you may now want to fall into a deep, contented sleep, exercise is the better option. A zigzag down the hill will take you along the Rua da Galeria de Paris, home to some great little shops, then past the legendary and aptly named Café Majestic. Going since 1921, this Art Nouveau gem is a great place to stop for some invigorating post-Francesinha caffeine.

Back down at the Douro, stroll along the historic and characterful riverside through Ribeira, one of Porto’s oldest neighbourhoods and a UNESCO World Heritage Site. There are stalls selling knick-knacks – linen tea towels or tablecloths are really cheap and make great gifts – as well as a number of cafés and wine bars.

It’s the perfect place to sample the region’s famous wine. Enjoying a glass of chilled white port, local olives (and the weird big white beans my bowl of olives came with), watch the setting sun backlight the old Rabelo sailboats that used to transport big casks of port.

You’ll find a number of traditional restaurants along the river too, if you’re in the mood for a fishy super – try either petiscos (basically fish tapas) or bacalhau (dried and salted cod). Otherwise, walk back up the hill and pick a table at one of the eateries scattered throughout the old city.

I ended up at Impar Flores on Rua das Flores that served a rather delicious steak and a bottle of Casa Ferreirinha Papa Figos Douro red wine. That and Esteva Douro – also by the Casa Ferreirinha winery – were my go-tos in Portugal. I wouldn’t describe them as complex but they were imminently quaffable.

If you’re looking for post-dinner nightlife, head back across to Rua da Galeria de Paris and Rua de Cândido dos Reis to one of the many small bars and clubs. The area feels deserted until 9pm, then it suddenly fills with patrons strolling in from all corners. On Saturday mornings, Rua de Cândido dos Reis also hosts a lovely antiques and crafts market.

This meander along the Douro’s steeply rising banks is a visual feast, with architecture that sees narrow streets and alleyways separate imposing classical stone giants from delicate Art Deco and Art Nouveau slices, and, of course the traditional blue-tiled churches. Porto is a lovely, welcoming city – and it will completely charm you.